This barrier island is a constantly shifting ribbon of sand which is altered daily by powerful wind and waves. In the middle of the East Coast, Assateague Island is an exhilarating, uniquely preserved stretch of coastal wilderness along the Atlantic seaboard. With 48,000 acres, it remains one of the largest mid-Atlantic barrier islands to have a continuum of intact coastal habitats — with very little human interference.

Assateague Island became dedicated as a National Seashore on September 21, 1965. At one time Assateague was not an island, but rather was connected to Fenwick Island. A storm in August of 1933 ripped through the long island opening an inlet between the southern end of Ocean City and the new Assateague. Taking advantage of this new opening, the inlet was fortified to keep it open, allowing passage from the ocean to the bay. To this day you can stand on the tip of either island and view the other from across the inlet.

Today, Assateague Island serves as a public land where visitors can come to relax, recreate and immerse themselves in the tremendous resource. Popular Activities include bicycling, walking the beach, swimming, surfing, wildlife viewing, birding, crabbing, fishing and kayaking. Over 1 million visitors come to Assateague each year, including the Chincoteague National Wildlife Refuge located in the Virginia district of Assateague Island. 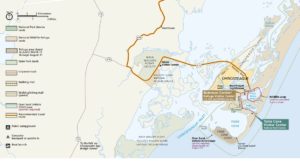